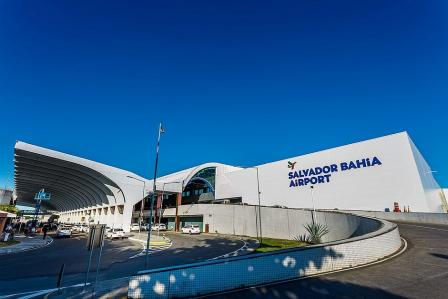 In a survey carried out by the National Civil Aviation Agency, Salvador airport has achieved the highest score, meeting 33 of the 36 criteria mapped

Salvador Bahia airport, a member of the VINCI Airports’ network, has just been acknowledged as the "Most Sustainable Aerodrome in Brazil in 2019", in an unprecedented assessment by the country's National Civil Aviation Agency (ANAC). The "Sustainable Aerodromes" survey has mapped environmental management practices at the country's airports and relied on voluntary participation by the institutions.

In this mapping, 36 indicators were taken into account, including water, power and waste management, climate change, atmospheric emissions, noise, soil, fauna, and flora as well as environmental awareness-raising and organizational management. The capital of Bahia's airport has met 33 out of the 36 criteria assessed, registered a score of 88.85% and was considered to have sustainable actions at an advanced level.

All these actions, by putting sustainability at the heart of the airport’s model, anticipate the mobility of the future, which will be more sustainable and technological.Salvador airport will keep moving forward with other great sustainable projects such as 4.2 MW peak self-consumption PV park which should be inaugurated in the near future.

"We are aligned with VINCI Airports’ global environmental policy. Betting on the use of new technologies, improving processes and engaging employees in favor of sustainability are pillars that have been part of our commitment since we took over the concession of the Terminal”, said Salvador Bahia Airport's CEO, Julio Ribas.

The acknowledgement by the “Sustainable Aerodromes” project adds to the Terminal's other achievements in this area. The Airport is recognized as a "green airport" by the Airports Council International – Latin America and the Caribbean (ACI – LAC) and has achieved Carbon Accreditation Certifications (ACA) at both first and second levels.

"We are very happy with this new achievement. All the recognitions that we have achieved in sustainability are the result of unremitting, collective work carried out daily, in a planned, careful and strategic way", highlighted Salvador Bahia Airport's Environmental Manager, Rodrigo Tavares.

Learn about some of the Airport's sustainable initiatives in different areas.

Water management – Thanks to the implementation of an Effluent Treatment Station (ETE) with 99.5% efficiency, Salvador Bahia Airport has adopted a system for reusing water in toilets, cooling towers, and other non-noble purposes. As a result, there has been a 37% reduction in the consumption of drinking water. Moreover, the faucets in the Terminal have aeration nozzles, which reduces water flow without affecting the user's perception.

Energy Efficiency and Reduction in Carbon Emission – Having achieved level 2 of the ACA (Airport Carbon Accreditation) certification, the Airport acts on this front with improvements to the air conditioning system, the installation of intelligent devices such as presence sensors on the stairs, elevators and toilets and the replacement of conventional lamps by LED. In addition to that, it is the first in the country to have a solar plant supplying the Terminal. The equipment has 4,215kWp of power and aims at reducing the Airport's carbon footprint by 30%, which is equivalent to 690 tons per year.

Solid Waste Management – Salvador Bahia Airport is the first “Zero Waste to Landfill” airport in Brazil. The totality of the waste generated at the Terminal is collected, classified in its Solid Waste Center and allocated properly, being used as raw material for recycling or for the generation of energy and cement. Annually, more than 1,300 tons of solid waste are processed and reintroduced into production processes, thus adopting the concept of circular economy.

Valorization and preservation of Biodiversity – Salvador Bahia Airport has over 200 cataloged bird species and develops fauna risk management. Through the fauna management license, it monitors, captures with techniques that do not cause damage to animals, deliver veterinary treatment, species identification and subsequent release to nature in licensed places. Thus, it preserves local biodiversity and reduces collisions with damage to aircrafts by 80%.

Located in Salvador, capital of the State of Bahia and Brazil’s first historic capital, Salvador Bahia airport is part of the VINCI Airports’ network since January 2nd, 2018, through a 30-year Concession Agreement. Among the ten busiest airports in the country, it connects the state of Bahia to about 30 destinations, both domestic and international.

Since the beginning of the concession, the airport has been incorporating global operating standards, seeking to deliver greater efficiency, safety and an enhanced travel experience to its passengers. Intense investments in an expansion and modernization program have led to the extension of the built area to 22,000m², the addition of six new boarding bridges, the opening of the commercial aviation runway and the installation of a fire detection and firefighting system. In addition, the airport has committed to support the state's economic development through traffic development and tourism stimulation initiatives.

Recognized as a green airport by the Airports Council International, Salvador Bahia airport stands out for its sustainability achievements among which the disposal of zero effluents, energy efficiency measures and the implementation of an effective solid waste recycling program, in line with VINCI Airports’ commitment to carbon footprint reduction. The airport also seeks to value and promote the social and cultural specificities of Bahia, one of its greatest assets.

VINCI Airports, as the leading private airport operator in the world, manages the development and operation of 45 airports located in Brazil, Cambodia, Chile, Costa Rica, Dominican Republic, France, Japan, Portugal, Serbia, Sweden, the United Kingdom and the United States. Served by more than 250 airlines, VINCI Airports' network handled 255 million passengers in 2019. Through its expertise as a comprehensive integrator, VINCI Airports develops, finances, builds and operates airports, leveraging its investment capability and know-how to optimise the management and performance of airports and carry out extensions and upgrades. In 2019, its annual revenue for managed activities amounted to €4.9 billion, for a consolidated revenue of €2.6 billion. www.vinci-airports.com.

We advise you to visit this page of our website regularly, to ensure you are aware of the Service Policies in force. Note that Airport of Salvador also reserves the right to change the contents of this website at any moment.

The objective of the website is to provide commercial and operational information considered to be relevant for the users of the Airport of Salvador.

This website cannot be shown embedded in other websites that do not belong to Airport of Salvador.  Nevertheless, the user may create and distribute links to the pages of www.XX. Airport of Salvador reserves the right of accepting such links or not.

The website and the mobile version of the website XX may contain advertisements (including banners), promotions and other contents supplied by third parties, including the retailers. All advertisements, promotions and other contents (including the reference buttons and hyperlinks) do not constitute any recommendation or endorsement from our part regarding the promoted good, service, or final website of the link.

All information provided at the advertisements or the final websites of the links shown at www.XX or its mobile version are of the exclusive responsibility of the advertisers. In case the user shall need any clarification regarding any advertised product or service, should contact the related advertiser.

In particular, Airport of Salvador has no control or responsibility over:

Even so, Airport of Salvador requires advertisers, retailers and third parties, recipients of the links, to sign Service Level Agreements, therefore minimising the risks for our users.

The website XX may contain links to other external websites operated by third parties, including retailers. The websites to which such external links correspond to are not under control of Airport of Salvador, which does not assume any responsibility for the contents of such websites, or the provision of any goods or services the user may acquire or hire on any one of such websites. Airport of Salvador may not ensure that the contents of any third party website are accurate, legal or harmless.

Some external websites may be shown in the website XX through frames, whether including some of our website contents or not, or include reciprocate links to our website. Such resources are available only for the convenience of the users and do not constitute an endorsement to such websites or their contents. Users assume the exclusive responsibility for using external websites.

Airport of Salvador may, at any time and based on the criteria it may deem appropriate, terminate the access of the user to the website XX.

Please read our Privacy Policy, which defines the way we collect and use personal information that may be obtained through your use of the website XX.

The website users implicitly agree not to hold Airport of Salvador responsible for any direct or indirect loss arising from the use of the information contained therein. Similarly, Airport of Salvador shall not be liable by the services and/or products offered by third parties through this website.

Disclaimer and Limitation of Liability

Airport of Salvador does not claim or ensure that the use or access of the user to website www.XX shall be uninterrupted or free from errors, or that the availability of the material in this website shall be free from virus or bugs. Using this website takes place at the account and risk of the user. Users assume full responsibility and risk for any losses arising from the transfer, use or access to data, information and other materials on or through the website XX.

Particularly, Airport of Salvador does not guarantee the accuracy of the information provided, or the integrity, reliability or fitness for a specific purpose, of the contents of this website.

Except as above mentioned, Airport of Salvador shall not accept any liability for any direct, indirect or consequential damages, losses, damages or inconveniences suffered or incurred by any person arising or related with this agreement, the website, any use of this website (including any operations carried out through this website), the trust on any content of this website or by the acts, omissions or conduct of any advertiser on w website www.XX.

Airport of Salvador, as well as the retailers present on website XX are not accountable for delays or contractual breaches due to force majeure, disturbance, total or partial strike, flood, fire or war.

The agreement between the user and Airport of Salvador, based on these terms and conditions, shall be ruled and construed according to the Brazilian law.

The user undertakes, irrevocably and unconditionally, to submit to the non-exclusive jurisdiction of the Brazilian courts, regarding this agreement.

What information do we collect?

Users may visit our website anonymously. In order to understand their objectives and improve their experience, we also collect data on the pages our users visit.

How do we use the information collected?

The information we collect may be used for one or several purposes:

The information we collect - either public or private, shall not be sold, traded, transferred or given to any other company, for any reason, without your consent, except for the express purpose of allowing the requested services to be performed. If necessary, Airport of Salvador may allow access to your information to trusted parties that help Airport of Salvador in operating the website XX and help serving the user. In such case, the partners undertake to keep such information confidential.

How do we protect users’ information?

Airport of Salvador may also disclose your information in case that is necessary to enforce the law, to enforce our website policies, or to protect our property or security rights, or the property or security rights of others. Non-identifiable information on visitors (such as, for example, use statistics) may be provided to third parties for marketing, publicity or other purposes.

In case Airport of Salvador decides to modify its privacy policy, this web page will be updated.

According to the provisions of the law in force, users of website XX are entitled to have access, correct and cancel their information.